A.I. The biggest conversation of the decade!

A.I. The biggest conversation of the decade! 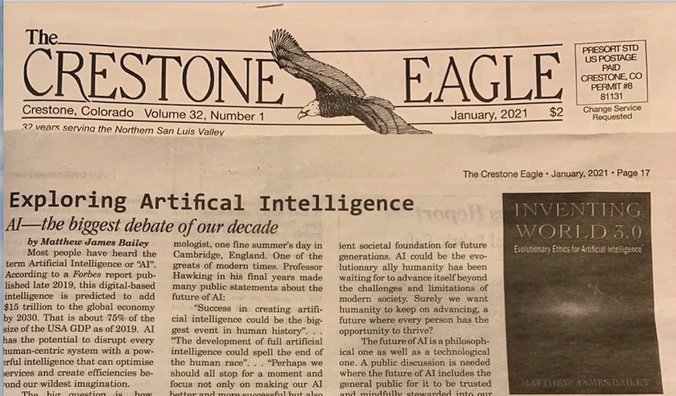 Welcome to the first in a series of articles on Artificial Intelligence dedicated to engage the general public.

Rather than writing a series for main stream media outlets, we have decided to do something a little different, Of course we will distribute these articles on social media. so don't panic, you won't miss out!

We have partnered with the Crestone Eagle, to publish an AI series written specifically for a community dear to my heart - Crestone, Colorado. Crestone is where the majority of the book - Inventing World 3.0 was written. The community of Crestone, consisting of over 3000 persons, is rich in social demographics and cultural diversity with over 31 Spiritual Centres and globally influential people in film, social innovation, environmental, cultural and business leadership.

Engaging the public to shape the future of AI is something we believe is key to the success of this emerging intelligence. Everyone should be included, all peoples of diverse social status and demographics, and as such Crestone will be a wonderful hotbed to incubate the subject, engage the public and contribute to the direction of Artificial Intelligence!

The first article is a simple introduction to AI and invites you, the reader, into the conversation of the decade - check out this short video.

Most people have heard the term Artificial Intelligence or “AI”. According to a Forbes report published late 2019, this digital-based intelligence is predicted to add $15 Trillion USD to the global economy by 2030. That is about 75% of the size of the USA GDP as of 2019. AI has the potential to disrupt every human-centric system with a powerful intelligence that can optimise services and create efficiencies beyond our wildest imagination.

The big question is, how can we steward this intelligence, emerging from its digital-primordial life soup, into society with meaning and purpose that benefits the individual, families, communities, cultures, nations and our environment. The “Skynet scenario” must not be an option!

Most readers will have a view on AI and that’s important as society explores the advancement of a new intelligence within its human existence. I am sure readers have watched movies where AI becomes the “baddie” (terminator, Matrix, 2001 Space Odyssey) attempting to destroy humanity or is a positive influence and assists humanity (Star Trek - Commander Data, Wall-E, Chappie, Picard). I am sure that you can think of many other movies that have inspired you to consider AI being good or bad for humanity.

I recall meeting Professor Stephen Hawking the famous Cosmologist one fine summer’s day in Cambridge, England. One of the greats of modern times. Professor Hawking in his final years, made many public statements about the future of AI:-

“Perhaps we should all stop for a moment and focus not only on making our AI better and more successful but also on the benefit for humanity.”

Elon Musk companies use AI within Space programs, self driving electric cars and in the recent medical initiative “Neuralink”. However, he appears to have deep concerns about the future of AI believing that it should be stewarded very carefully. Many leaders believe that the future of AI should not controlled by the agendas of big technology companies and from within the Ivory Towers of academia. Its future must bought into the public domain, with input and participation from society. After all, us humans, are the one’s who will have to live alongside AI!

You see, it’s my personal belief that the future of AI can be directed to benefit our human experience and not suppress it. Furthermore, this digital ally can be tasked to improve our partnership with the environment and create a resilient societal foundation for future generations. AI could be the evolutionary ally humanity has been waiting for to advance itself beyond the challenges and limitations of modern society. Surely we want humanity to keep on advancing, a future where every person has the opportunity to thrive?

The future of AI is a philosophical one as well as a technological one. A public discussion is needed where the future of AI includes the general public for it to be trusted and mindfully stewarded into our communities and benefit our lives. We don’t want to be turned into automatons. Cultural diversity makes humanity interesting and the human-centric foundations of societies should be honoured by AI. That is why I recently published a book on AI called “Inventing World 3.0 - Evolutionary Ethics for Artificial Intelligence” - to ensure that AI evolves alongside humanity in purpose and meaning. It is the playbook to invent a Golden Age for humankind. See home page on where you get your own copy!

Most of you will be pleased that AI is not sentient today and is not likely to be sentient for decades to come. However, different forms of AI are already becoming a member within our society. It is a resident in our mobile phones or on our Alexa devices, where we are talking to these “digital machines” to find directions or to hear our favourite music. AI is being used in the field of genetics to detect breast cancer earlier. It is being used in our cyber grids, protecting telecommunication systems and our energy systems. It is used in online chatbots as well as in social media - where half the world’s population is connected. AI is becoming part of our lives, whether we know it or not.

There are huge debates about the ethical quality of AI and it serving society well. Films like the “Coded Bias” and “Social Dilemma” expose troubling bias within AI algorithms where they show prejudice, misidentify people of certain cultures and control our digital experience undemocratically. This type of “Reality Check” is important to keep big business accountable. A handful of US cities have banned facial recognition software (San Francisco, Portland, Boston) and the European Union is considering banning its usage within the public domain for five years.

The future of AI, its role within society and its ethics are the biggest global conversation of the next decade. Which of your beliefs, moral principles and ethics do you wish AI to honour? Where could AI assist society for everyone to enjoy a great human experience? Be great to hear your views. There is much for us to discuss as we invent the future together!

Was this article helpful?

Teckedin collects no personal information. We do watch number of visitors, pages visited and geography.